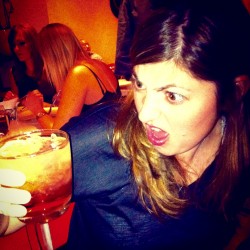 From the minute I was of drinking age, well maybe a little before then, I have been a beer girl… and I am not talking about fancy beer, unless you consider Labatt’s Blue an import. The most exposure I had to beer was at this amazing bar called Porters. It was that college bar that you did not go to until you were 21 because you didn’t go there to get drunk (except for $5 pitcher night on Thursdays), but you went there to enjoy the multitudes of different beers they sold. They had this amazing cheese board that you would eat while you took the ultimate challenge of drinking 64 beers before you graduated. The goal was to drink every beer on the list and receive a pewter mug that is engraved and entitled you to 50 cents off drafts. Some people accomplished this in a month (like Dave), while others like myself actually took a few months and enjoyed it. Well most of it, except that one that tasted like smoked ham. This was the first time I really had an appreciation for drinking anything other than what my Dad drinks. So let’s just say this is where my first sense of experimentation with alcohol began.

Next came wine. Other than Boone’s Farms, I had never wanted to drink wine until my senior year in college. Dave had come back from Italy and was on a wine kick, so we started with sweet white wine, moved to Chianti, and eventually I found out what I had been drinking was terrible. I enjoy most dry reds and I am in strong agreement with Miles Raymond… “If anyone orders Merlot, I’m leaving. I am NOT drinking any fucking Merlot!”

It was not until my loving brother-in law introduced Blaine to the family that I began to drink martinis and Cosmos and all sorts of concoctions that I never could have imagined. No matter what the occasion, Blaine always has a special cocktail to make. When our daughter Bella was born, the first time Blaine and Michael came to visit, Blaine made a Bellatini. For the life of me, I can’t remember what it was made of, but it was pink and green to match her nursery and it was the sweetest gesture. I also learned that Champagne is for any time you feel like it. Let’s just pop a bottle because I am in the mood for a little bubbly.

I am not really the one that typically makes the drinks, I like to leave that to Dave and Blaine, but this project is going to change that for me. I really want to focus on drinks that are light, delicious, and not full of calories. I also have a new found appreciation of anything made with elderflower liquor. I am definitely looking forward to playing with some champagne cocktails as well. Nothing puts a smile on my face like the pop of a champagne bottle.